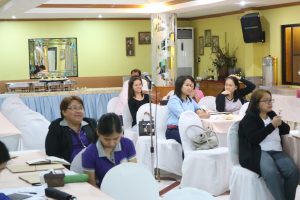 The Department of Social Welfare and Development through the Listahanan or the National Household Targeting System for Poverty Reduction (NHTSPR) Unit recently conducted a Data Users Forum on the Listahanan 2 Database Sharing.

The National Household Targeting System for Poverty Reduction (NHTSPR) or Listahanan is a unified information management system used to determine who and where the poor are.

The Forum was aimed to advocate data sharing to organizations and Agencies interested to engage with the Department and in the process, serve as a take off point for the forging of Memorandum of Agreement between the Field Office and the stakeholders.

Significant topics were discussed in the forum which included, an Overview of Listahanan, The Regional Profile of the Poor in the Region based on the results of the Second Round Household assessments conducted in 2015.  Salient Points of the Data Privacy Act of 2012, Sharing Guidelines and the Processes and requirements needed in engaging into a Memorandum of Agreement was also discussed.

Policy and Plans Division Chief, Zosimo Butil, who represented the Regional Director during the activity, in his welcome message, thanked the participants of the Forum for their active participation and their eagerness to engage with the Department of Social Welfare and Development through data sharing and utilization of the data in identifying the potential beneficiaries of their social welfare and development programs and services.

The National Household Targeting System for Poverty Reduction (NHTSPR) or Listahanan conducted the First Round of household assessments in 2009 wherein, for Region 10 alone, 338,749 households were identified as poor.

Other programs of the Department utilizing the data in identifying their beneficiaries also includes Scholarship Program for Pantawid (ESGPPA-Expanded School Grant Program for Poverty Alleviation) Social Pension and Supplemental Feeding.

The Second Round household assessment was conducted in 2015 wherein, out of the 870,596 households assessed region wide, 485,806 households were identified as poor.

The National Household Targeting System for Poverty Reduction or Listahanan is now on its phase of intensifying its advocacy to the Local Government Units in the region.

For the year 2017, Listahanan’s focus will be on data sharing with stakeholders.  For now, several Local Government Units, some partner Agencies and even regular Programs within the Department have requested for the updated Listahanan data for different purposes.